The lawn mower  has to be one of the most common garden machines in use. Just about every home in the UK owns one of these (or at least every home with a garden) and there are many different brands and designs available.

The first lawn mower was invented by Edwin Budding in 1827 in Thrupp, just outside Stroud in Gloucestershire. Budding’s mower was designed primarily to cut the grass on sports grounds and extensive gardens, as a superior alternative to the scythe, and was granted a British patent on August 31, 1830.

One of the very earliest surviving Lawn Mowers. From around 1832.

Budding’s first machine was 19 inches (480 mm) wide with a frame made of wrought iron. The mower was pushed from behind. Cast iron gear wheels transmitted power from the rear roller to the cutting cylinder, allowing the rear roller to drive the knives on the cutting cylinder; the ratio was 16:1. Another roller placed between the cutting cylinder and the main or land roller could be raised or lowered to alter the height of cut. Once cut, the grass clippings were hurled forward into a tray-like box. It was soon realized, however, that an extra handle was needed in front to help pull the machine along. Overall, these machines were remarkably similar to modern mowers.

There are three main types of mower available today. Cylinder, rotary and hover.

The cylinder mower carries a fixed, horizontal cutting blade at the desired height of cut. Over this is a fast-spinning reel of blades which force the grass past the cutting bar. Each blade in the blade cylinder forms a helix around the reel axis, and the set of spinning blades describes a cylinder.

A rotary mower rotates about a vertical axis with the blade spinning at high speed relying on impact to cut the grass. This tends to result in a rougher cut and bruises and shreds the grass leaf resulting in discolouration of the leaf ends as the shredded portion dies. This is particularly prevalent if the blades become clogged or blunt.

Underside of a modern Rotary Mower

Most rotary mowers need to be set a little higher than cylinder equivalents to avoid scalping and gouging ofslightly uneven lawns, although some modern rotaries are fitted with a rear roller to provide a more formal striped cut. These machines will also tend to cut lower (13mm) than a standard four-wheeled rotary.

Hover mowers are powered rotary push lawn mowers that use an impeller above the spinning blades to drive air downwards, thereby creating an air cushion that lifts the mower above the ground. The operator can then easily move the mower as it floats over the grass. Hover mowers are necessarily light in order to achieve the air cushion and typically have plastic bodies with an electric motor. The most significant downside, however, is the cumbersome usability in rough terrain or on the edges of lawns, as the lifting air-cushion is destroyed by wide gaps between the chassis and the ground. Hover mowers are built to operate on steep slopes, waterfronts, and high-weeded areas, so they are often used by golf courses and commercial landscapers. Grass collection is often available, but can be poor in some models. The quality of cut can be inferior if the grass is pushed away from the blade by the cushion of air. Our garden machinery and equipment category improvement is now well under way! Many of you may have noticed that a lot of the categories have been moved around with new and improved images and a more logical layout to them.

The next stage is to add more products and whilst planning for this we have come across some weird and wonderful products that will be available to buy very soon. It was at this point that we suddenly realised that there may be products already on our site that people do not know how to use!  Over the course of the next few weeks we are going to publish blogs that may help to explain some of our items  and to kick off we are going to start with this chap…

It is an aerator and at the moment we only have the one on our site (more will be following very soon!).

Lawn aeration comes in different forms and can help keep your lawn  healthy. It reduces water use, can improve your soil and breakdown the organic materials which can prevent moisture and other nutrients from entering you soil. It saves water (when you aerate your lawn water is better able to permeate the soil.. This will help you save up to 50%). It also reduces compaction – over time soil becomes compacted. Compaction reduces your lawns ability to root and absorb nutrients. Loosening up your soil is a great way to improve your lawn’s overall health. Aeration also reduces puddles – more of the rain that falls onto your lawn will be absorbed. You should also benefit from improved rooting – roots need plenty of oxygen to prosper. Aeration helps provide roots with more oxygen and nutrients to help them grow bigger and faster. Your lawn will also be tougher – when your lawn is properly aerated it will help to improve tolerance to stress such as heat and drought. This helps keep your lawn green and healthy even during the hot summer months. 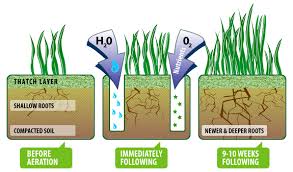 Lawn aeration doesn’t have to be an exact science. In general the more you aerate the better as long as you avoid destroying your lawn completely. How often is best to do it largely depends on your type of soil. Lawns that compact easily could benefit from aeration twice a year while sandy lawns may only need to be done every couple of years.